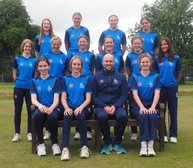 Cams get over the line in a low scoring thriller.

In a reverse to game 1, Hertfordshire batted first against Cams. They got of to a bad start with Suzannah run out in the first over. And much like the first game Herts struggled to score on this tricky pitch with only Poppy showing any signs of fluency in the middle. Thanks to some late boundaries from Darcey, Herts reached 78 from their 20 overs.

Cams this time struggled to get away at the start of their innings thanks to a very threatening opening spell from Emily and Jenna, with both removing an opener each. Then came a fabulous spell for Herts, thanks in most part to Darcey and Amba, as 6 Cams wickets fell for just 26 runs. However, once again Lulu proved to be the thorn in Herts side, as her 27* not out saw Cams over the line with just 1 wicket left.

Herts next game is against Northants on the 2nd May.

Please note that although this fixture is listed away, we are trying to arrange it for a home venue. We will confirm these details as soon as we have them.